So I've got a couple stories from Ua to tell you about. Hopefully they bring a smile to your face (otherwise I guess you just had to be there).
A couple of nights ago Ua was playing with his toy camera (but it really does take pictures). I had just put new batteries in it and he was using it for the first time in some time. When he got done taking pictures he said, "Dad how do you turn it off"? So I responded, "Push the power button right there" pointing it out to him. He pressed it but nothing happened. I said, "Oh, maybe you have to hold it down". At which point he bent over, put the camera on the ground and pressed the power button again. (Crazy English language anyways!). "No, no, you need to hold the power button down". :-)
Then on the way home today Ua was playing with his toy Noah's Ar. He said, "Mom, do you want to know how to spell ark?" She responded, "sure!" So he started "M... A... D..." At which point I'm wondering what is going on because he doesn't usually get letters in a row that make sense. He continues "E... W... C... H... W... A... and that is how you spell ARK" He's 3.5 years old now and knows his letters but the IN looks like a W to him. 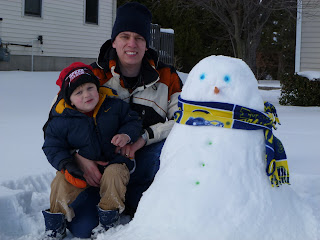 This afternoon Ua and I tried to make a snowman. The snow was packable but wouldn't roll. So we proceeded to pack the snowman together. Here he is... We used M&M's for the button's & eyes.
In case you didn't get the second one he was spelling MADE IN CHINA!
Have a good week!!!
Posted by Dawson64 at 3:15 PM No comments:

Keeping your computer and information safe

I tried to edit my post but somehow broke it, so here goes again. You can reread it if you'd like.

OK OK... it has been a LOOONG time. I've been doing some reading to keep up with some of the tech stuff out there. I have found some really good articles that layout some things you can do to protect your information. (Honestly I just wanted to make sure I had some of these links somewhere to reference so I thought I would share at the same time!)

There are several areas that I could go into but a couple of key ones are backups & password management. If you aren't doing either you may want to consider it.

There are several ways you can backup your information on your computer. You can use an application that backs up your information to the web like mozy.com or syncs your files to the web like dropbox.com. Mozy seems to be better from a pure backup standpoint (I deleted my file & need to get it back) where as dropbox can share files between multiple computers. If you don't want your data on the web you can get an external hard drive (ideally bigger then the drive in your computer) and setup your own backups. Here is a good link that will help get you started.
BACKUP PROCEDURES SO EASY, EVEN YOUR MOM COULD (AND SHOULD) DO IT


Lastpass will help you with your online passwords. Some of you may not have a problem remembering your password because you use the same one everywhere. Lets say you create an account at coupon website where you can login to see the specials. You use your every day password to login & you give the website your email address. So you pretty much gave them your email address and password to your email (so you must trust them). What if that website gets hacked & all of the account information is stolen? How much financial info do you have in your email? Do they use the same password???
Here is an article on How to Update Your Insecure Passwords and Make Them Easy to Use
An alternative password tool is KeePass which is similar to LastPass but your passwords are kept in an encrypted file on your computer (just make sure you back it up).

There is a good overview of these tools here: Give the Gift of No-Fuss Backup and Synchronicity to Your Less Tech-Savvy Loved Ones

Another good article on overall computing is: How to Keep Your Computer Safe, Clean, and Backed Up in 2011

Finally, I ran across this a week ago and found it to be a good read. So in case someone is interested HOW TO BUY A LAPTOP IN 2011 (FOR THE NORMAL PERSON)

I found out what elves are doing in their off time!

Send your own ElfYourself eCards

It has been a while

I have been keeping busy at work.  I have been helping out with some quality documentation for some headrest launches.  I have been doing a lot of learning but am also challenged by the fact that 1/2 the machines and people that know the machines are in Mexico.   This has worked out well because I am able to work on my laptop at home on Wednesday while Josh is sleeping (so Jodi can go to GRCC to teach).
Speaking of teaching, she is teaching another class.  It is during Josh's lunch & nap time so it works out well.  Trisha now watches Josh on Monday, Tuesday and Thursday afternoons.  He has fun playing with the kids.
Today while I was watching Josh he decided he would climb up on the dining room chair.  He wanted to get into my backpack and diaper bag (he likes to unzip things and empty them out).  Then when Jodi got home from teaching he climbed up on the chair to try to get some of her supper.  I asked her if she had seen him do that before and she said "no".  A little while later as we cleaned up Josh climbed up on the chair and then up onto the table!!!
That is all for now.
Posted by Dawson64 at 9:54 PM No comments:

Some changes at work

Some of you may know that my little production cell I've been running is coming to an end.  I've been making plastic microphone housings for about 3 years now and the product is no longer needed.
I have been keeping very busy with some IT projects.  I'm assisting our Mexico division with the move of their computers and servers into a new building.  The greatest challenge is having the two buildings both functioning while connected over a small connection, smaller than most of your home Internet connection.  I look forward to helping the Mexico team make the final move to their new building.
My next cell will likely be manufacturing a stainless steel tube that goes into a water filter.  It is similar in size and complexity to my machine so it could be a good fit.  I'm not sure how long it may be for.  I could be moved to another building which would allow me to develop our IT team further (within that building).
I have some of you setup to automatically get emails when I make a new post.  If you want on or off the list just let me know - some posts may be a little more IT related :-)
Posted by Dawson64 at 9:28 PM No comments:

First Master, now Professor.
Jodi's got a new job. She is now an adjunct professor at GRCC (Grand Rapids Community College). She is really excited! She had her first meetings tonight and starts teaching next week Wednesday!
Way to go D!
Posted by Dawson64 at 10:12 PM 1 comment:

I've been walking on my own for almost 2 weeks now!